What Is Parallelism in GD&T?

For both types of GD&T parallelism, the goal is to maintain parallelism (0° alignment) to the datum element (axis or plane) according to the constraints specified in the feature control framework. 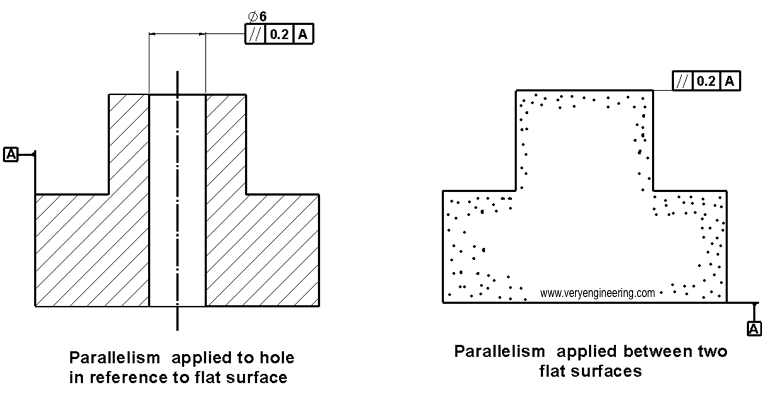 In the case of surface parallelism, the parallelism tolerance zone consists of two theoretically exact parallel planes. The distance between the two planes is the tolerance limit of the dimension. All points on the plane or center plane must lie in two parallel planes for the part to be approved.

Axis parallelism creates a cylindrical tolerance zone. It is used to hold the axis of a dimensional feature, such as a pin or hole that is parallel to the datum. All points of the central axis of the feature must lie within this cylindrical area for the part to meet specification. In this type of zone, the allowable angular deviation can be controlled by reducing or increasing the diameter of the cylindrical zone.

Relation To Other GD&T Symbols

Parallelism and flatness are similar to each other on many levels. They all have similar tolerance zones. They basically control the flatness of the surface they are applied to. Their measurement method is the same.

However, there are some key differences that can help us differentiate the two. For example, parallelism, like all other orientation controls, cannot operate without a datum. Compare the slope of the surface to the datum plane to create tolerance zones.

On the other hand, when using flatness tolerances, the surface is measured in terms of itself. Tilt doesn’t matter as long as the flatness is within limits. With parallelism dimensions, regions can be translated or moved, but not tilted relative to the datum.

How to Measure Parallelism

Parallelism is easy to measure. Like flatness, gauges pass through a reference surface or feature. Unlike flatness, however, the part is constrained to a granite block or plane, which is used as a datum for measuring the part.

There are several ways to measure parallelism. The most commonly used method is the reference plate parallel measurement. In this method, components are placed on a flat base. Make sure the datum must be clean and accurate, depending on the level of accuracy you want.

The dial indicator then moves across the surface. Metrics must be within tolerance or the component’s parallelism fails.