Electroplating is a process of plating a thin layer of other metals or alloys on the surface of some metals by using the principle of electrolysis. It is a process of using electrolysis to attach a layer of metal film to the surface of metal or other material parts, so as to prevent metal oxidation (such as rust), improve wear resistance, conductivity, reflectance, corrosion resistance (copper sulfate, etc.) and enhance beauty. 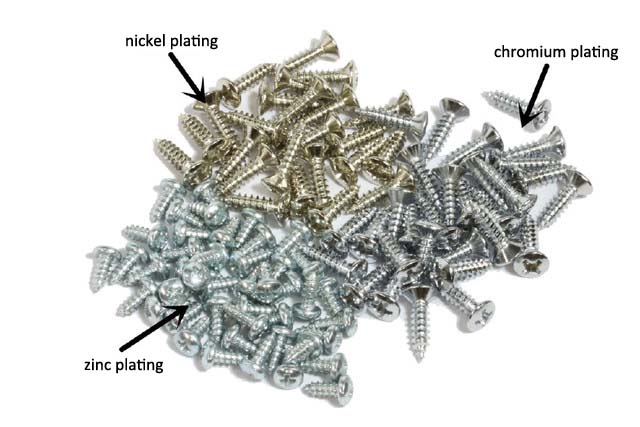 Chromium is a bright white metal with a slight blue color. The method of plating a layer of chromium on metal or some non-metal by electrolysis or chemical method is called chromium plating.

Chromium is very stable in humid atmosphere, alkali, nitric acid, sulfide, carbonate solution and organic acid, and is easily soluble in hydrochloric acid and hot concentrated sulfuric acid. Under the action of direct current, if chromium layer is used as anode, it is easy to dissolve in caustic soda solution.

The method of plating a layer of nickel on metal or some non-metal by electrolysis or chemical method is called nickel plating.

Nickel has good chemical stability in the atmosphere and alkaline solution, and is not easy to change color. It is oxidized only when the temperature is above 600 ° C. It dissolves slowly in sulfuric acid and hydrochloric acid, but it is easily soluble in dilute nitric acid. It is easy to passivate in concentrated nitric acid, so it has good corrosion resistance.

Nickel coating has high hardness, easy polishing, high light reflection and can increase beauty. Its disadvantage is that it has porosity. In order to overcome this disadvantage, multi-layer metal coating can be used, and nickel is the intermediate layer.

It is usually used to prevent corrosion and increase aesthetics. Therefore, it is generally used to protect decorative coatings (energy-saving lamp caps, coins, hardware, etc.). Nickel plating on copper products is ideal for corrosion prevention, but because nickel is relatively expensive, copper tin alloy is often used instead of nickel plating.

galvanizing refers to the surface treatment technology of plating a layer of zinc on the surface of metal, alloy or other materials to play the role of beauty and rust prevention.

zinc is relatively stable in dry air and is not easy to change color. In water and humid atmosphere, it reacts with oxygen or carbon dioxide to form oxide or alkaline zinc carbonate film, which can prevent zinc from being oxidized and play a protective role.

Zinc is easily corroded in acid, alkali and sulfide. Generally, the zinc coating should be passivated. After passivation in chromic acid or chromate solution, the anti-corrosion ability is greatly strengthened because the formed passivation film is not easy to interact with moist air. For spring parts, thin-walled parts (wall thickness <0.5m) and steel parts requiring high mechanical strength, hydrogen must be removed, and copper and copper alloy parts may not be removed.

galvanizing is widely used in atmospheric conditions and other good environments. Screws, circuit breakers, industrial supplies, etc., but should not be used as friction parts.

The most basic differences between the three kinds of electroplating

1: Chromium plating is mainly to improve the surface hardness, beauty and rust prevention. Chromium coating has good chemical stability. It does not work in alkali, sulfide, nitric acid and most organic acids, but can be dissolved in hydrogen Halic acid (such as hydrochloric acid) and hot sulfuric acid.

3: Galvanizing is mainly beautiful and rust proof. Zinc is an active metal, which can react with acids, so it has poor corrosion resistance and is the cheapest of the three.